- April 24, 2013
I have finally managed to get some time to do some self learning and after a developer at work came back from an SP2013 training course and said "It's all changed" - dread in his eyes, "It's all Apps!" I thought it would be a good plan to get things going on SP2013 and see what this App business is all about.

Now I'm not a full blown developer by any means, I've been working developing SP2010 solution packages for the last 8 months, and picked up C# in that time, so my knowledge is relatively small, I know the odd bit of jQuery + JavaScript, enough to get by.

I went and had a look at MSDN for some guide to preparing a rig to get going with and decided to use this guide:

How to: Create app parts to deploy with apps for SharePoint

On here it lists some prerequisites and explains how to make an app running on a backend web page that can then be included on your SharePoint site (it took me a while to read up on this and get my head around the new App process). I thought all is good, I created my Windows 2012 Domain, put a separate SQL server on and started to install SharePoint 2013. I carried on and even Visual Studio 2012 Ultimate went on without a hitch - great. Finishing off with installing SharePoint development tools I thought now for some app development!

This is where the fun stopped. I followed the guide and noticed VS was being helpful and adding a whole load of crud to the solution file. I deleted most of this and added a HTML page to include there code in. Linked the start page to my new on and tried to deploy it.

Turns out apps run on a App Management Service Application! After a whole bunch of weird errors being fired up trying to deploy it I found another guide - thanks Microsoft for not telling me..

This explains a whole bunch of setup tasks that are needed to get your Farm into development mode, including a whole site template that must be created to deploy and debug apps to.

After running all this I thought I was ready.. hit the debug button and finally I have an app deployed, I receive the trust app screen and think all is good but.. 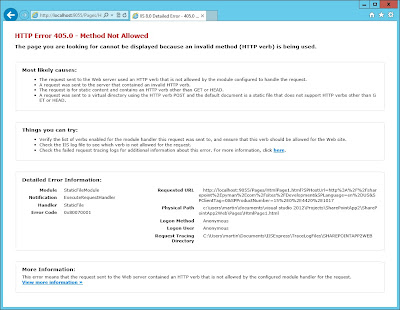 I had a whole bunch of HTML in the page so thought I'd cut it down to just some text. Still nothing. I did a bit of a trawl around on the internet and came across this blog:

In here they describe the exact issue and turns out it can be resolved by adding some more handlers to the applicationhost.config file and voila! (I've not come across this file and originally thought of looking in the web.config file, turns out you use web.config when you go to deploy it for real... it's all in that link.)

After quite a lot of pain the fruits of my labour can be seen below (well at least it works!) 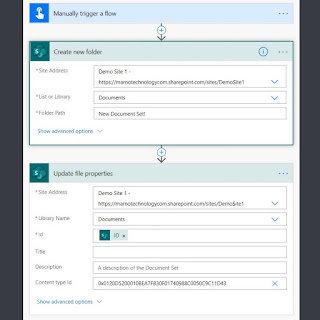